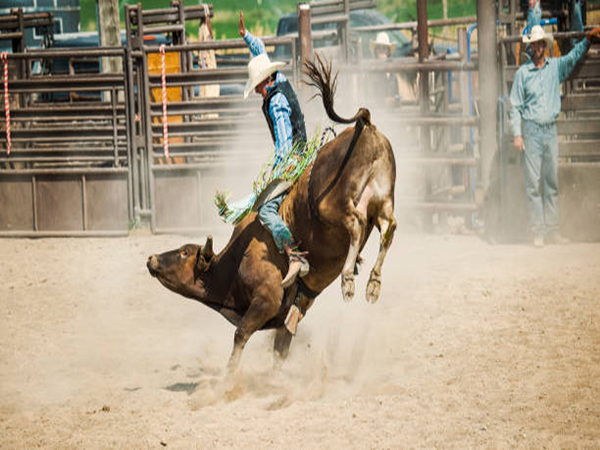 Washington (USA) Jan 4: Straddled atop a 2,000-pound, bucking bull is the ideal place to appreciate the danger of bull riding. A safer method is listening to Tandy Freeman, an orthopedic surgeon entering his 25th year as the onsite doctor for the Professional Bull Riders (PBR).
Freeman said he has seen one rider die, two riders suffer cervical spine injuries that rendered them quadriplegic and he expects the estimated rate of injury - one every 15 rides - will continue Friday in New York City when the PBR opens its 2019 season with a three-day event at Madison Square Garden.
"Bruises and abrasions and things like that don't count,'' Freeman told USA TODAY Sports. "But if I've got to sew you up, if you break a bone, if you've got a muscle injury that can affect your ability to compete, then we count that as an injury.
"We're not trying to inflate the numbers. I don't need to inflate the numbers. They're big enough just looking at the things that are really, truly injuries.''
Added Freeman of bull riding, "Bull riding isn't a contact sport. It's a collision sport.''
One of the most gruesome recent collisions took place in July at the Cheyenne Frontier Days in Cheyenne, Wyo.. With Chase Outlaw atop a bull named War Cloud, the bull reared up, jerked forward violently and Outlaw's face collided with the back of War Cloud's head.
Outlaw, who was knocked unconscious, said he broke more than 30 bones in his face.
During emergency reconstructive surgery, doctors inserted 68 screws and 11 titanium plates in his face and used bone from his skull to repair his nose, according to Outlaw, who provided USA TODAY with X-rays of his injuries.
He returned to action two months later and will compete in New York with only one concession: He will ride with a helmet. About half of the PBR riders compete with a cowboy hat, taking advantage of a grandfather clause after the PBR mandated in 2013 that riders wear helmets.
"Each and every time, there's a little bit of fear,'' Outlaw said of the feeling as his next bull ride approaches. "But that's why we ride at the top level, that's why we're riding at Madison Square Garden, is 'cause we can handle that fear and conquer it.
"We're frickin' warriors. I mean, you have to be to survive in this sport.''
But Outlaw's use of a helmet underscores a heightened awareness of injuries - especially head injuries - since Ty Pozzobon, a Canadian rider, committed suicide in 2017.
Tanner Byrne, another Canadian rider, is among Pozzobon's friends and family members who contend that a series of concussions that Pozzobon suffered riding bulls resulted in brain trauma and depression and ultimately led to Pozzobon's death.
"I've been completely knocked unconscious in the arena one time, and I know that because there's video evidence,'' said Byrne, who co-founded the Ty Pozzobon Foundation that supports the well being of rodeo athletes. "But the amount of times that a guy gets hit or is dazed and you get that weird feeling and you get sick later on, it's ridiculous, especially in the past.
"I didn't know all the affects it would take until 2016 when Ty started to have issues.''
Sean Gleason, CEO of the PBR, said the PBR donated more than $2 million to the Western Sports Foundation after the foundation that supports injured bull riders pledged to focus more on concussion research.
"We take injuries serious,'' Gleason said. "It's not like we're out there just promoting the sport on the basis of these guys get hurt, come watch.
"But injury is a realistic part of the sport of bull riding, and that isn't ever going to change."
Source: USA Today