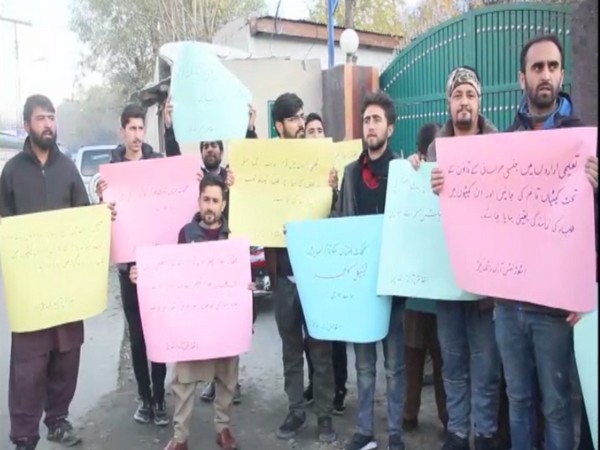 Gilgit (PoK), Dec 3 (ANI): Students of Karakoram International University in Gilgit held protests against Islamabad, accusing the establishment of systematically depriving them of seeking higher education.
A disgruntled leader of the student's union of the University said, "Pakistan is playing with our youths. It wants to turn them into slaves. It wants mentally weak people. I have come from Karakoram University to tell you that they are trying to brand the NSF (National Students Federation) as an anti-state element."
"Students are scared. Trust me! Their lips are sealed. They are terrified of the consequences that their participation in the protests will have. What could be sadder than the fact that the state is hell-bent on silencing the youth, considered to be the backbone of society?" the student leader stressed while hoping that voices may now shake up Islamabad from its decades-old slumber.
The entire region of Gilgit Baltistan with a population of more than 3 million just has only one university, and to make matters even worse, the institution does not have professional programmes, along with an inadequate number of professors.
Amid such scenario, the students who want to pursue professional programmes, including engineering and medicine, are left with no second choice other than heading to Pakistani cities for higher studies.
The students also blamed the administration for turning a blind eye to the call for setting up more educational institutions and increasing the number of seats in the varsity.
"Gilgit Baltistan is least developed when it comes to education. There is only one university in the region. Many educated youths from our area are not even given chances to get enrolled in universities in Rawalpindi and Islamabad. At least, one engineering and another medical university should be set up here," said another student participating in the protest.
Despite repeated pleas and demands, the administration of the region, which largely operates at the commands of Islamabad, has been apathetic to the crisis, the students stated.
However, such a state of affairs is not only limited to the education sector. The people of Gilgit Baltistan experience discrimination in almost all spheres of their lives. Either it is civil liberties, quality of life or voting rights, the people here have been granted almost nothing by the Pakistan establishment - the occupier and self-proclaimed protector of the region. (ANI)